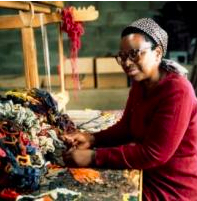 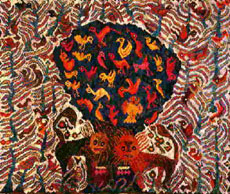 Allina Ndebele built her weaving mill in a remote settlement near Swart-Mfolozi in KwaZulu-Natal in 1977. Before that she worked many years as a weaver, teacher and supervisor at ELC Art and Crafts Centre in Rorke’s Drift. During this period, she also lived in Sweden for some time where she was educated further in weaving. To South Africa and beyond, Rorke’s Drift is legendary for the role the centre played in the development of art among the black population during apartheid.
Allina Ndebele finds inspiration in local legends and stories told by her mother and grandmother during her youth. With hand-woven wool, painted by herself, she recreates the myths of Zulu into large, intensely coloured textiles. The process of making tapestry is a very long and completative one which requires complete concentration. However, Ndebele uses no supporting drawing except the image in her mind’s eye.
In 1998 Allina Ndebele was awarded the Thami Mnyele Prize, for making an exceptional and positive contribution to both art and society, in the present and the past. According to the Foundation, Allina Ndebele won the award because, ‘under the most difficult circumstances, she has succeeded in building up a meaningful life as an artist and has set up a weaving mill which has increased the employment and opportunities for development in her immediate surroundings. Through the quality of her work, the love for her heritage, sense of social responsibility, entrepreneurial spirit and belief in her own abilities, she is an example for the qualities on which South Africa has built a new future’.