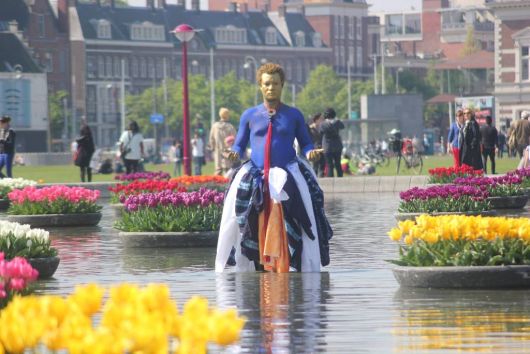 Bernard Akoi-Jackson is an internationally renowned artist from Ghana. As a student at the KNUST art school in Kumasi, he focused on painting, but quickly moved beyond the possibilities offered by the painter's canvas. Akoi-Jackson makes extensive use of everyday materials, enlarges commonplace actions into rituals, manipulates texts he encounters and plays with the symbolic values of color. A recurring theme is his exploration of concepts such as identity and originality and the question of how, in our society, we construct value judgments around these concepts. What does it mean to be Dutch; what does it mean to be Ghanaian? What role does history play? As Akoi-Jackson holds a mirror up to us, his viewers, his approach to these poignant issues is critical, yet laden with humor and joy.
Education is an essential part of his practice as an artist. He also teaches art at Tema International School, a private Ghanaian high school near to the capital city Accra, where he, with his colleague, gladly bring young people into contact with art.
He has exhibited at numerous venues internationally. In 2012 he took part at the group exhibition Time, Trade & Travel at SMBA Amsterdam.
Bernard Akoi-Jackson will be our guest during September and October 2014. His visit is part of the collaborative effort between the Thami Mnyele Foundation and the Stedelijk Museum Amstedam.

More information on the Time, Trade & Travel show at SMBA