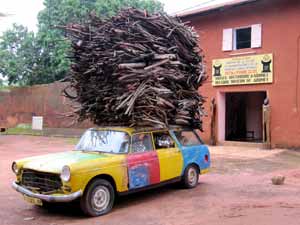 Dominique Zinkpè (1969) has been regularly participating in exhibitions all over the world for more than a decade now, including the Biennale of Dakar and exhibitions in France, Germany and Japan. He makes sculptures, paintings and installations.
Zinkpé achieved world-fame with his ‘taxi-brousse’ project: painted taxis jam-packed with passengers and overloaded with luggage were to bring art closer to the man in the street. The exhibition drew about five hundred people a day.
At the centre of his work are human-sized sculptures made from branches of wood, iron wire and textiles. The deformed branches which form the construction of the sculptures resemble the roots of the mangrove. These personages combine an animalistic and natural appearance with human characteristics. They refer to situations in the daily life of Zinkpé on a local, regional and international level, such as political injustice, religion and AIDS.
Zinkpè stayed in the Thami Mnyele Foundation Studio at the beginning of 2003. His taxi featured in the ‘Afrika Hier en Nu’ exhibition at the CBK in Emmen. He also exhibited a ‘hospital bed’, on which was lying a gunnysack figure linked up to dozens of drips with the names of relief organizations on them.
Domique Zinkpè lives and works in Marseille and Cotonou, Benin.

Zinkpé was invited by the African in the Picture festival where he produced his famous taxi project.
Painted taxis overloaded with luggage were used to explore transience, accumulation and proximity, while at the same time bringing art closer to the man in the street.
Taxi Zinkpe was driven around the city of Amsterdam during the Africa in the Picture film festival 2003.