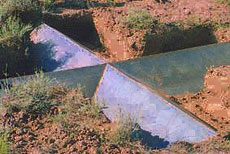 ‘Black and white do not interest me – I prefer grey – I like my darkness to be lit, to investigate darkness, to become it. Like trying to breathe in a vacuum.’

Two years in Amsterdam at the Rijksakademie (1997-98) gave Greg Streak (1971) the distance he needed to stand outside of what he describes as the ‘whirlpool’ of South Africa. In South Africa, the constant questioning and dissection of his identity as a white male had become increasingly restrictive; working in a more global context freed him up, allowing for reassessment and work that became less specific and more ambivalent.
This is reflected in the variety of forms that Streak's work takes. Sometimes lean, with a serious, minimal flavour, at other times engaging in figuration or issues of narrative, Greg Streak’s work plays between abstraction and representation. With a sharply critical and eclectic eye he re-makes, interrogates and claims as his own a diverse range of references ranging from modernism to B-grade movies, as is evidenced his video work which wittily questions the nature of reality, fiction and representation as well as alluding to the violence in the South African context.
Greg Streak was an artist-in-residence in 1997.