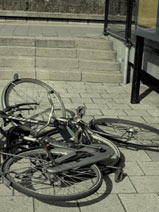 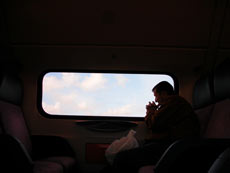 Guy Wouete (1980) lives and works since 2011 in antwerp belgium. . Guy Wouete's work always encompasses of social criticism.
After his residency by the Thami Mnyele foundation, Guy Wouete went to the Rijksakademie in Amsterdam. In his work Guy Wouete researches the symbolic languages that translate a real emotion or feeling into form. He questions what people hold back in our modern society, what symbolic languages are present and how he himself can translate a real emotion or feeling instead of using a formal and faithful rendition of the subject or theme. Herefore he applies a range of media such as drawing, painting, photography or video, in his reach for the musicality of an image, sound, word, phrase and gesture.
As a ‘self educated’ artist Guy Wouete took part in several workshops and residences in Douala, SPC in Mbalmayo and Centro Colombo Americano, Columbia, South America. Most recently he was selected for the Dak’art Biennial 2006 in Senegal and received 5th price, besides a nomination of the price of the Jean-Paul Blachère Foundation, Dakar / Senegal. During his three month stay at the Thami Mnyele studio in Amsterdam (2006) Guy Wouete took part in the exhibition Sur le Chemin de l’Émigration at Galerie 23 in Amsterdam.