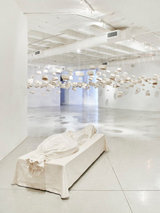 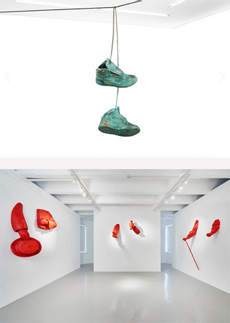 Gunn-Salie completed his BA Hons in sculpture at the University of Cape Town's MichaelisvSchool of Fine Art in 2012. His work was featured in exhibitions and projects amongst: Simon and Hans Ulrich Obrist's 89-plus project, for which he participated in the 89plus programme with Obrist at the 2014 Design Indaba in Cape Town; Making Africa: a Continent of Contemporary Design, which travelled to the Vitra Design Museum and Guggenheim Museum Bilbao (2015); What Remains is Tomorrow, the South African Pavilion at La Biennale di Venezia (2015); and the 19º Festival de Arte Contemporâne Sesc Videobrasil (2015). He was awarded at 19º Festival de Arte Contemporâne Sesc Videobrasil in 2015 with the SP-Arte/Videobrasil prize, and presented a solo exhibition at Galpão VB during the SP-Arte fair in São Paulo in 2016 as part of the award. He is represented by Goodman Gallery.