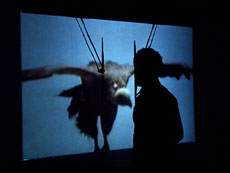 Born in Angola in 1972, Isaac Carlos studied at the Center for Art and Visual Communication in Lisbon, Portugal from 1998 to 2000. He went on to work as an artist-in-residence at the Rijksakademie van Beeldende Kunsten in Amsterdam.
Carlos is mainly interested in the different layers of communication emanating from an object or an atmosphere. Sometimes he appropriates or transforms an object, reverting its meaning in an attempt to present it as a metaphor, while still referring to its original function. By doing so, he exposes some of the theatrical and narrative characteristics of the object, although the focus is centred on a non-linear narrative. Simple fragments, as if they were a dream or a journey to the unknown world of the subconscientious.