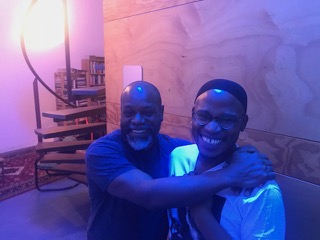 Jabu Arnell, born St. Maarten, Dutch West Indies, studied in the USA and in the Netherlands. Arnell's work is an interplay between weakness and power flow. It holds images of cause and effect between the body and the mind. Every image that occurs to him, is a living figure, even if it has a translucent appearance or no physical appearance, and is for example, a scent, a path of energy, or a contemplation. In the past, in November and December 2016, and in the beginning of January 2017, Jabu Arnell was our Thami Mnyele Foundation award artist in residence.

Sinethemba Twalo, born 1985 in Umtata, South Africa, lives and works as an author, stylist, DJ and artist in Johannesburg and Pretoria, South Africa. From 2007 till 2009 he studied international relations and sociology as well as gender studies at the University of Pretoria (2009-2011). He is a member of the artist group ARCHIVE in Johannesburg. His work has been shown in group exhibitions, at amongst others, Haus der Kulturen der Welt, Berlin, Germany; ifa-Galerie, Stuttgart, Germany; Metamorphosis and Times Memorial in Johannesburg, South Africa. Performances, workshops and seminars also took place in Berlin, Johannesburg and Pretoria. Twalo is co-founder and co-director of NGO-Nothing Gets Organised located in downtown Johannesburg, South Africa. NGO is a collective platform interested in un/conventional processes of self-organizing processes that do not imply structure, tangibility, context or form. Arnell and Twalo will present their work later this year.