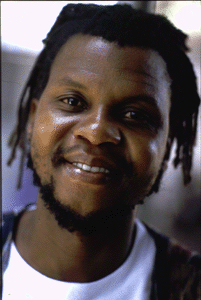 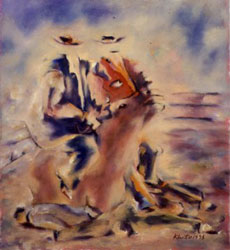 Kheto Lualuali (1965) was a guest of the Thami Mnyele Foundation in 2002, when he was preparing his exhibition at the Netherlands Institute for Southern Africa.
The artwork of the Mozambican artist Kheto Lualuali can be divided in seven different phases. According to Lualuali, these phases represent his ‘archives’, which are made up of different artistic forms and styles, or techniques that the artist tries to develop continuously. The theme of his artwork refers to the human being and la condition humaine. At times we only see forms, like a hat on top of two legs, at other times we can discern more distinct figures, almost in permanent movement. Indefinite images, which seem to be hiding something that the painter doesn’t want to reveal. Sometimes we seem to see a world we already know, but then we get lost; the viewer looks for a beacon, but Lualuali refuses to give us one. His paintings invite us to engage in a continuous dialogue. What we saw yesterday, will that be the same tomorrow?
From 1993 Kheto has dedicated himself entirely to the fine arts. Since then he has participated in various group exhibitions and has had seven individual shows in Mozambique and abroad. Kheto Lualuali lives and works in Amsterdam.