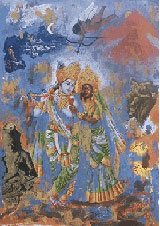 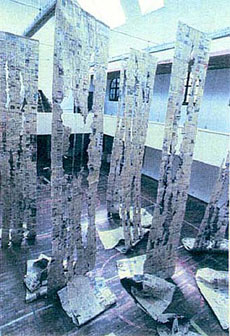 ‘My religion is art.’
Born in Mauritius, Krishna Luchoomun (1963) studied at the USSR Academy of Fine Arts between 1983 and 1990, an institute which offers a classical education in the tradition of socialistic-realism. Once he had returned to Mauritius, Luchoomun’s work became more experimental, focusing on environmental issues as a central theme in his work.
Krishna Luchoomun worked as an artist in residence in the studio of the Thami Mnyele Foundation from February to May 2001 and also visited the studio in July 2013. Luchoomun concluded his period in Amsterdam with the presentation of the impressive installation ‘The Yellow Pages’ in an old church in Amsterdam, rendering Luchoomun’s vision on the relationship between industry and the environment. In 2003 he participated in the exhibition ‘Guess Who’ in the Stedelijk Museum Zwolle. Luchoomun is now professor of Art at the Academy of Art in Mauritius.

In November 2003 Krishna Luchoomun launched pARTage at Eureka House in Moka, Mauritius. The beginnings of pARTage reflects the pioneering spirit of some highly dynamic local artists and characterises the upbeat and changing face of the local art scene.

pARTage was a vision conceived by Krishna Luchoomun in the form of an idea for a potential workshop during his residency at the Thami-mn-yele Foundation in the Netherlands in 2001. Having there had a feel of the energy and momentum that epitomizes such workshops, Luchoomun started seriously considering setting up something of a similar nature in Mauritius. He was positively encouraged when Pauline Burmann, chairperson of the board of the Thami-mn-yele Foundation enabled a meeting with Robert Lauder, director of the Triangle Arts Trust of London. This turned out to be quite a lucrative and compelling initial step towards the realisation of Luchoomun’s dream. His enthusiasm and drive for this project was met accordingly and Lauder helped by making accessible information on how to integrate the workshop through Triangle Arts Trust’s existing network, and by directing Luchoomun towards the right places to seek funding in order to kick start the project.
The Mondriaan Foundation and the Prince Claus Fund, both cultural organizations based in the Netherlands, have been organising orientation trips for art and design professionals to Asia, Latin America and Africa since 2004.

The trips are aimed at exchange and cooperation between visual art and design professionals. In 2010, the trip took place from 1 till 13 March. The group visited museums, galleries and met people active in the field of contemporary art in Turkey (Istanbul), Nigeria (Lagos) and Mali (Bamako).
For this trip Krishna Luchoomun was invited by the Prince Claus Fund.