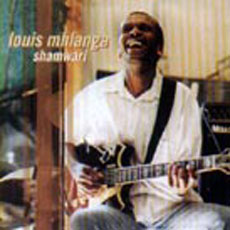 Louis Mhlanga and his Band.
Louis was born in 1956 in Harare, Zimbabwe. He started playing guitar at the age of ten. Being completely self taught he mastered the instrument by copying from records like Jimi Hendrix, The Beatles, The Rolling Stones, Led Zeppelin, Deep Purple and many other bands that were very influential in the late sixties, early seventies. Besides the Western influence through radio broadcasts Louis investigated and studied the Southern and West African Guitar tradition intensively. He transferred the traditional Mbira patterns, which are well known all over Africa into a unique way of playing the guitar in an eclectic, modern way.
Louis Mhlanga's playing is very clear and bright; his melodic feel and superb sense of timing make him a true master on the instrument. This mastery combined with a deliberate yet delicate singing voice expresses what a special musician and human being he really is.
Louis Mhlanga and his band stayed in the studio in 2002, when performing in the Netherlands at the invitation of Afrovibes.