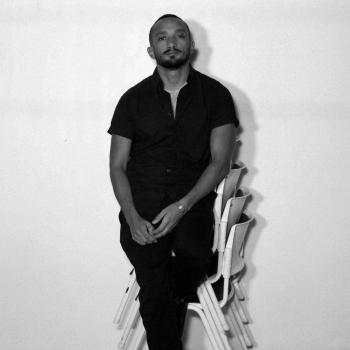 Mahmoud Khaled explores identity and intimate dynamics while questioning the larger structures that produce them. Moving between the scale of the minute and a more immersive totality, his work takes on failure, austere violence and the aesthetics of an institutional heritage. Engaging with the burden of nostalgia and state-sanctioned processes of constructing collective memory, Khaled reproduces artifacts of dead ideologies and thinks of those who were crushed in the process of their erection. And in attempts of projection he thinks of canonic commemoration and the marginalized bodies it leaves behind, so he reformulates and records their presence through absence. For Khaled, a queer identity is explored through the objects that inform it and an amassed knowledge: articles of desire, spatial gestures and simulated conversations.

Khaled’s classical training as a visual artist seems to manifest in his interest in materiality and formal composition and their capacity to mimic the theatricality of power. His relationship to a fine art education is critical and conversational. It informs an alternating ontological position where he either pronounces himself within the work as a vocational voice or swaps it for another hat: once performing the protagonist role of a painter flâneur and another time an absent curator of a colossal condition. His work complicates and appropriates form to offer virtual proposals that rethink justice and imagine possibilities for a redemptive future.