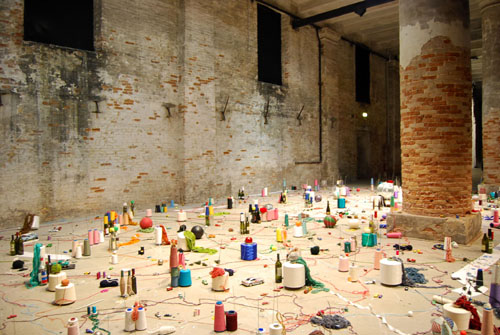 Moshekwa Langa was born in 1975 in Bakenberg, South Africa. He attended the Max Stibbe Waldorf school in Pretoria. After a period of experimentation with writing and making objects related to drawing, sculpture and sound recordings he moved in 1997 to Amsterdam to take part in the residency programme at Rijksakademie van Beeldende Kunsten.

Moshekwa Langa's installations, videos and collages are fresh and surprising, often provocative, yet exhibit a depth and sureness of touch astonishing in one so young. Materials for his drawings and installations are whatever comes to hand - bubble wrap, cigarette butts, toys, spools of cotton, street maps, advertisements - anything can be transformed into a marker in a world created by Langa. Titles are often literary, riddle like, alluding both to a personal history and universal experience. He is the subject of his own videos, producing work that is at the same time both funny and primal, like his True Confessions: My Life as a Disco Queen. Refusing to be classified as a black artist from Africa, Langa neatly sidesteps all attempts to package him as the latest art world commodity, forcing his viewing audience to set aside all preconceptions, and engage with what Langa chooses to set before it.

Amongst his solo exhibitions are those that were held at: the Renaissance Society at the University of Chicago (1999), the Centre d'Art Contemporain, Geneva, the Maxxi Museum, Rome (2005), the Kunsthalle Bern (2011), the Krannert Art Museum and the University of Urbana Champaign (2013).The Jealous Lover ­IFA Galerie, Stuttgart and Berlin (2014). He has participated in numerous group exhibitions including: The short Century; Independence and Liberation Movements in Africa 1945 ­1994. African Art and History. And exhibitions in amongst others Munich, Berlin, Chicago and New York.