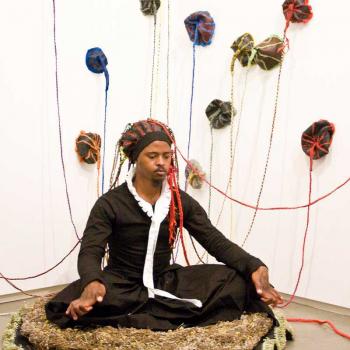 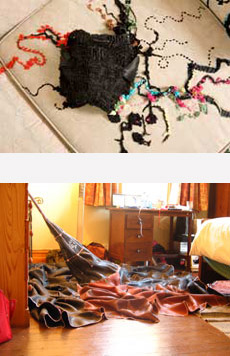 Nicholas Hlobo creates sculptural installations that explore and reflect his Xhosa heritage. Personal and collective memory slides in and out of focus as he reframes and re-presents traditions and rites of passage. With intelligence and sensitivity, Hlobo considers how such customs are evolving in changing times.

Entwined with this cultural scrutiny, the artist engages in an investigation of sexual identity and personal politics, contemplating his position as a gay man within Xhosa culture in post-apartheid South Africa.
In his investigation of past and present Hlobo reinvents and recycles objects. His materials often include leather, rubber, ribbon, furniture and other domestic found objects. The obsessive stitching, braiding and knotting he frequently employs reveals an intensity of making that revolves around craft and touch. The tactile nature of his materials and his hand-worked methods imply tradition and skill, but result in something that is more contemporary than historical in meaning. Unsurprisingly, Hlobo sometimes performs with his sculptures, partly dressed as – or in – one of his forms, further highlighting the significant relationship of materials and body.

he lives in Johannesburg. Nicholas Hlobo is the Rolex Visual Arts Protégé for 2010/11, working with Anish Kapoor as his Mentor. In 2008 he had a solo exhibition, Uhambo, in the Level 2 Gallery at Tate Modern, London, and showed at the Boston ICA as part of the Momentum series. Recent group exhibitions include Dada South? at the South African National Gallery, Cape Town (2009); Beauty and Pleasure in South African Contemporary Art at the Stenersen Museum, Oslo (2009); Gender, (Trans) Gender and (De) Gendered, a special project of the Havana Biennale, Cuba (2009); Mythologies at Haunch of Venison, London (2009); the third Guangzhou Triennial, China (2008); Flow at the Studio Museum in Harlem (2008); Home Lands/Land Marks at Haunch of Venison, London (2008); and .za: giovane arte dal Sudafrica at Palazzo delle Papesse, Siena (2008). He was the winner of the Tollman Award for the Visual Arts 2006, and the Standard Bank Young Artist for Visual Art 2009