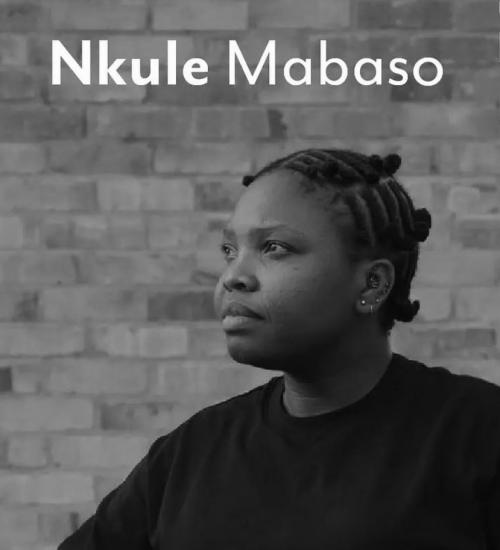 During her one month stay in Amsterdam, she will work towards producing a publication on the project she did for for the Mama Winnie Madikizela Mandela Brandfort House Interpretive Centre, and is planning to visit archives in Amsterdam in order to build a reader on the cultural impact of Winnie Mandela, evidenced by the work of poets, writers, painters, designers, and more who have written about and sung about her over time. Additionally, she will be visiting and working with multiple Dutch art institutions, such as ZAM Magazine, Zuid Afrika Huis Amsterdam, where she will contribute to a publication about the work of our fellow Ruan Hoffmann who was a resident at Thami Mnyele Foundation in 2010.

As a curator, Nkule Mabaso has worked with Thami Mnyele Foundation before. In 2018, she, together with Manon Braat, curated a group exhibition Tell Freedom at Kunsthal KAdE in Amersfort (hosted by Thami Mnyele Foundation), which, among others, included works by our fellows Haroon Gunn-Salie, Aline Xavier,  Nare Mokgotho and Neo Image Matloga.

Nkule Mabaso is  director of Natal Collective, a collective an independent production company active internationally in the research and presentation of creative and cultural Africana contemporary art and politics. She has recently finished working on a project for the South African Department of Sport, Arts and Culture, the scope of which was to research, design, develop and install the exhibition for the Mama Winnie Madikizela Mandela Brandfort House Interpretive Centre.

Her other recent projects include founding of the Newcastle Creative Network (2012-2017), being Curator of the Michaelis Galleries at University of Cape Town (2015-2021). The curation of the South Africa Pavilion at the Biennale Arte 2019, Venice together with Nomusa Makhubu under the title “The stronger we become", for the South African Department of Sports, Arts and Culture presenting the artists Tracey Rose, Dineo Seshee Bo. Past advisory board roles include serving on the Museum Services Board of the Western Cape Department of Cultural Affairs and Sport, Visual Arts Network of South Africa, The University of Cape Town Works of Art Committee.

Recent publication projects include editing Climate: Our Right to Breathe, K Verlag, 2022, together with Hiuwai Chu, Meagan Down, Pablo Martínez, and Corina Oprea. Climate: Our Right to Breathe is a book in response to vast, mutually exacerbating planetary conditions: the accelerated collapse of the biosphere under climate change and the increasingly crushing dynamics of toxic politics. But, the reactionary, divisionary politics driven by ruthless forms of authoritarianism, denialism, nationalism, and other globalized forms of oppression and dispossession are also a call to action. Functioning as contributing editor to the book Decolonizing Art book Fairs: Publishing Practices from the South with the editors: Yaiza Camps, Moritz Grünke, Pascale Obolo, Michalis Pichler, Parfait Tabapsi Decolonizing Art Book Fairs is a workbook with (primarily newly commissioned) texts and interviews that aims to think through the existing and speculative frameworks of organizational practice in the art book fairs. This workbook attempts to introduce new narratives and help deconstruct the frontiers between north(s) and south(s), putting an emphasis on practitioners and initiatives from the African continent and diaspora.

Mabaso received a Master’s in Curating from the Zürcher Hochschule der Künste (ZHdK), Switzerland in 2014, after graduating with a Fine Arts degree from the University of Cape Town, South Africa in 2011. Current advisory boards roles include CKR (Creative Knowledge Resources) at the University of Cape, the Standard Bank Art Gallery in Johannesburg, editorial board member and contributing editor to the On-curating.org Journal at the Zürcher Hochschule der Künste.