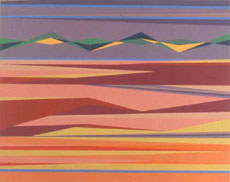 Donald Odita makes images from images, and his images are about images, about the construction of types and identities especially from outside the provenances defined and ultimately inhibited or disadvantaged by such images. Raised in the twilight of the great American surburbian age, Odita grew up with television and the screen, and the world he recalls and submits to critical examination is in large part outlined by the screen. Drawing on icons and images from this world, he calls attention to that persistent irony of American culture; segregation along lines of race and gender. With the recent abolishment of checks against the institutionalisation of this segregation in the State of California, Odita's work, though dealing with questions in a less specific and much larger, historical realm, becomes even more relevant. In the following statement, the artist explains his work, and the contexts of its making.