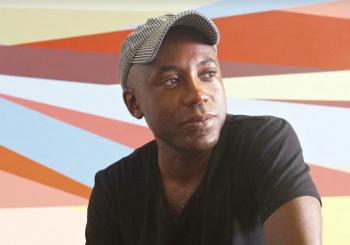 Odili Donald Odita (Nigeria) makes images from images, and his images are about images, about the construction of types and identities especially from outside the provenances defined and ultimately inhibited or disadvantaged by such images. Raised in the twilight of the great American surburbian age, Odita grew up with television and the screen, and the world he recalls and submits to critical examination is in large part outlined by the screen. Drawing on icons and images from this world, he calls attention to that persistent irony of American culture; segregation along lines of race and gender.

Donald Odita stayed in the Thami Mnyele studio during the month of May 2008.

Besides being an artist, he is also a critic who has written for publications such as Flash Art and NKA, and a professor who teaches painting at the Tyler School of Art, Temple University, Philadelphia. He had a solo show at the Jack Shainman Gallery, New York, from 18 November to 23 December 2010 He inaugurated the Project Space at the Studio Museum in Harlem, New York, with Equalizer (2007), was included in the Project Series at the Ulrich Museum at Wichita State University (2009). Other recent exhibitions include the 52nd Venice Biennale (2007); Ordering and Seduction at Haus Konstruktiv, Zurich (2006); Parallel Economies at Wertz Contemporary, Atlanta, Georgia (2006); the 2004 Dakar biennale; A Fiction of Authenticity: Contemporary Africa Abroad at the Contemporary Art Museum, St Louis (2003); and Black President: The Art and Legacy of Fela Anikulapo Kuti at the New Museum, New York (2003). He was awarded a Louis Comfort Tiffany Foundation Grant for 2007