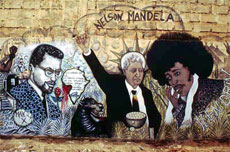 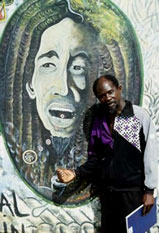 Mouride artist Pape Mamadou Samb (better known as ‘Papisto Boy’) paints on exterior factory walls in Bel-Air, an industrial neighborhood of the port of Dakar.
Pape Samb left rural Senegal as a ten-year-old orphan, traveling to the capital city of Dakar. Samb paints wall murals as a devotional task. He has no formal training, and his inspiration comes from dreams, his hand guided by the Sufi saints. Samb’s greatest achievement is a mural covering two hundred meters of the exterior wall of a Belaire factory yard. Papisto's murals portray what he calls ‘messengers’, from Martin to Malcolm, the Pope to Gandhi, Marley to Mandela. Overseeing them all is the enigmatic image of Amadou Bamba, the saint of Senagalese Sufism, whom the artist reveres.
Papisto refers to his mural as ‘literature’ and ‘poetry’, and through it he hopes to give courage to the hardworking people of Dakar's informal economy, while teaching them his views of world history.
Papisto Boy was a guest of the Thami Mnyele Foundation in December 2003. He came to Amsterdam to participate in the exhibition ‘Urban Islam’ at the KIT Tropenmuseum in 2003-2004. During the opening of the exhibition Papisto Boy painted a mural in the hall of the museum.