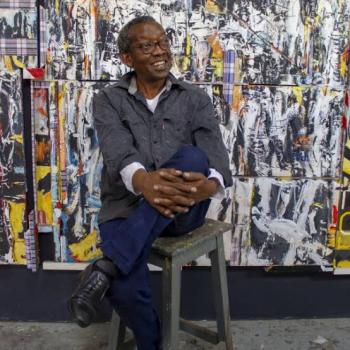 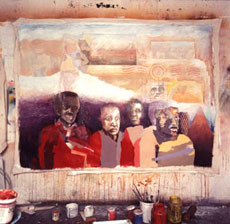 ‘I enjoy the finer things in life like meeting new people, travelling, reading, listening to African jazz and working in collaborative projects with artists with similar interests.’

Pat Mautloa (1952) studied art at Rorke’s Drift Art Centre, KwaZulu Natal and at the Mofolo Art Centre in Soweto. He has held many solo-exhibitions and numerous group presentations in South-Africa and Berlin, Houston Texas, Paris, Belgium, Nantes and London. Mautloa was a visiting artist to the Thami Mnyele Foundation Studio in 1993.
As an artist whose work eludes a neat definition, Mautloa is as comfortable in his abstract work as he is in the more figurative imagery. Most of his work is in oils and acrylic, but he has also included found objects and collages in his two-dimensional work: scrap materials attached to a board and painted with such a subtle brush evoke the essence of a glimmering light, or a tryptich of feed bags painted with the emblematic South African flag.
Textures are an important part of Pat’s work, as he works he notices the mundane surfaces around him and will sometimes use these in his work. Unexpected things like the rough surface of a well used cutting board, or a worn out cotton rag, hold a new fascination and beauty for him. Delicate drawing and seemingly random splatter entice the viewer and challenge one to look at the world in a new way.

Mautloa has exhibited in many solo exhibitions, group shows and workshops in South Africa, Botswana, Belgium, Germany, France, Holland, Switzerland, the UK, Ireland, the United States, Cuba and India. More recent exhibits include a show at the Sasol Works Awards, Johannesburg (2005), Faces to Names at Alliance Francaise, Johannesburg (2006), Shift at Goodman Gallery, Cape Town (2007) and Double 07 at Polokwane Art Museum, Limpopo Province.
Pat Mautloa has been based at the Bag Factory Artists Studios since 1992, when he left his job in the graphic design studio at the SABC to pursue his destiny as a full-time artist. He is currently the Chairman of the Bag Factory's board.