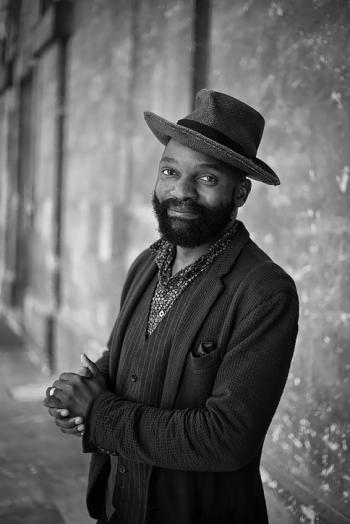 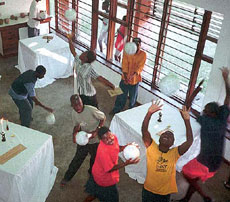 ‘When people in Amsterdam wanted to see African art I showed them the Holy Bible.’

Samson Kambalu (1975) went to study art at the Kamuzu Academy in Lilongwe, the capital of Malawi, at the age of thirteen. There, he became acquainted with western ideas about art and studied western philosophy and psychology. Although his roots lie in Africa, his mind is therefore imbued with western concepts and history.
It has taken Samson years to find a form for his art through which he can express this internal conflict. In 2000, Kambalu filled a space at the Department of Beaux Arts and Performances with tables, burning candles and Gregorian music. On the tables lay cardboard objects depicting biblical themes. Balls pasted with pages from the bible were lying on the floor, waiting to be picked up or played with. Samson wanted people to experience the freedom of playing football with four thousand years of history.
In 2003, Samson created ‘Black My Story’, a collection of photos that called into question people’s concepts of nationality, religion, race and ethnicity. Samson made a series of photos of rubbish bags lining the streets of Amsterdam, labelling each bag with ‘Black My Story’. ‘Black My Story’ was exhibited at Museum De Paviljoens in Almere. In that same year, he contributed to the exhibition ‘Guess Who’ in the Stedelijk Museum Zwolle. He also designed the ‘Gideon’s Room’ in the Winston Hotel in Amsterdam.
Samson Kambalu stayed in the Foundation’s studio in the autumn of 2000.

in 2007 kambalu wrote a book 'The Jive Talker, an artist's genesis"
Synopsis
Samson Kambalu's father wore three-piece, London-made suits from the Sixties. He'd planned to be a doctor but settled for hospital administration and a peripatetic lifestyle with his ever expanding family in tow. He is 'the Jive Talker' of this extraordinary memoir - a man of thwarted ambition, boundless optimism and manic philosophising, he died of AIDS in 1995, bequeathing his son 'the Diptych' - an eclectic library of science, philosophy and English language classics & shy; a passion for words and a boundless imagination. In this completely original, often subversive, book, Samson Kambalu writes of his childhood in Malawi, a country few are able to pinpoint on a map. As the family moves from feast to real poverty and deprivation, and back to plenty again, depending on their father's professional fortunes, we are introduced to life in a country in which no dissent is tolerated, where political opponents are 'disappeared' and a portrait of Life President Dr Hastings Kamuzu Banda is always guaranteed to be watching. But this is also a country in which a little boy obsessed with books, girls, Nietzsche, fashion, football and Michael Jackson wins a free education at the Kamuzu Academy ('The Eton of Africa') and grows up to be one of England's most promising young conceptual artists. With dazzling prose, wicked humour and not a little bit of artistic licence, The Jive Talker opens the door to an Africa that is rarely written about.

An arena of critical thought - review