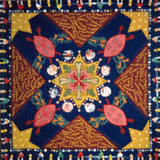 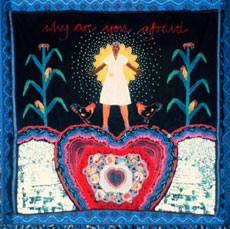 ‘The fact that I use a needle and thread in my work was not an intellectual decision. It was a natural process. I embroider because I am good at it and because I love the technique. My technique makes my work approachable.’

Kriel’s work is first and foremost political. She depicts ‘lost histories’ on large one-by-one metre scraps of textile. Photos of resistance heroes and heroines are attached to the material’s surface. Decorative edges made of buttons frame the central image and there are embroidered texts such as: ‘Why did you shoot us’, ‘Workers Unite’ and ‘You won’t get away with it’. Along with beads, buttons, photocopies and typical African elements such as bits of Coca Cola cans, Kriel also employs the decorative bead technique that uses the regular patterns of the South African Ndebele women. Embroidery is a traditional, white, female element in her work.
Sandra Kriel (1952) was a guest of the Foundation in 1992.