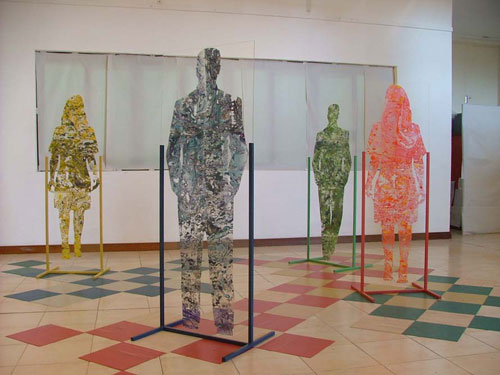 Sultana Haukim, selected by Hedwig Fijen, Director Manifesta and Thomas Peutz, Director NASA art space (NASA is the former SMART Project Space), will be our guest till the end of July. Sultana Haukim (1974) is born in Mauritius Island in the Indian Ocean east from the continent Africa. She graduated in Fine Arts at the Mahatma Gandhi Institute of Fine Arts in Mauritius and is a member of pARTage Association of contemporary artist in Mauritius. She has participated in several local and international exhibitions in Tanzania, Kenya, Sri Lanka, China, India and in South Africa.

"The themes for my work seem often to develop from personal experiences towards certain issues that I am faced with as a woman and a human being. Being a Muslim woman in a multicultural society- Mauritius- I find myself in between two worlds - one in which woman are confined to the cultural and religious codes of the patriarchal Islam and the other to the different social structures existing on the island. I guess my inspiration started there. In my work I try to analyze issues such as the concept of beauty as seen by the women herself and by the society, the objectification of women, oppression, abortion, genital mutilation and sexual discrimination."