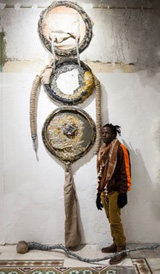 Terrence Musekiwa (b. 1990, Harare, Zimbabwe) comes from a long line of sculptors. He started carving stone at the age of five, at first helping his father and later moving away from traditional aesthetics. He breaks the divide between traditional and contemporary. While each work begins with the familiar toil of shaping the stone, works are then fused with a myriad of found and industrial objects including chains, plastics, glue, and resin. His visual language wrestles with convention to simultaneously challenge and pay homage to Zimbabwean tradition. His conceptual vernacular introduces a dialogue about present-day Zimbabwe, its mechanics, politics, micro and macro trade systems, hardships and a quality of magic that permeates the personal lives of its inhabitants.

Musekiwa studied at The School of The National Gallery of Zimbabwe, Harare (2013) and completed two art residencies in 2016: Tiroche DeLeon in Tel Aviv, and CTG: Newfoundland in Canada with the CTG Collective. In 2018 he will be an Artist In Residence at OMI New York. His work has been exhibited and collected internationally, with his first institutional inclusion in 2016 at the National Gallery of Zimbabwe.

This project "Folktales and Taboos # NL1" is a research on old ancient folktales and taboos that are imbedded in the culture . This project focusses on research, workshops, discussion and process. The intention of this project came from the fact that RaQuel van Haver and Admire Kamudzengerere worked together in Zimbabwe and felt the urge to collect and write down these ancient, old and most of all important tales before they got lost, for example by a religion such as Christianity. This collaboration means that artist from different kind of back grounds, experiences, culture but also different kind of tales the brought up with can be a mirror for one and other. A mirror to reflect upon ones life, decisions, culture and preferences.

The whole project will be on show in November 2018 in the CBK Zuidoost.