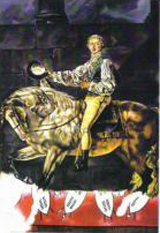 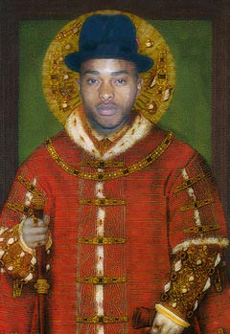 After four years of work and study in Johannesburg, Thulani Shongwe
(1980) returned to his town of birth Newcastle, South Africa. Comissioned by the local gallery (Carnegie Art Gallery) Thulani Shongwe continues to deepen his line of work and subjects in painting.Subjects that touch the fusing together of cultures, or to be more
precise, South African and Western culture. Black South African culture is strongly shaped and modelled by Western influences. Shongwe finds these aspects present in the colourful patterned Dutch fabrics that used to be worn by black South Africans. Symbols that turn up in his paintings of copied Western historic sceneries as portraits and Dutch domestic interiors. Sceneries that reveal the aspects of a daily life we can still relate to seen from both African as Western
perspective.
Thulani Shongwe finished his degree in fine arts at Wiwatersrand Johannesburg. He took part in several exhibitions in South Africa including the Absa Atelier, Johannesburg (2002 and 2003) and the World Summit 2002, Johannesburg. He took second place in the "Fresh Blue Dove" art competition (2001) and became one of the finalist in the Brett Kibble art award (2004). In October 2006 Thulani shows his work at Galerie 23, Amsterdam. Accordingly he plans an installation at Hotel Winston, Amsterdam.