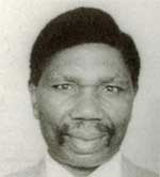 South African artist Tito Zungu’s (1939-2000) work is extraordinarily precise. Almost pensive. Starting on a small scale about thirty years ago, Zungu made drawings on envelopes for migrant workers for whom home was so ‘painfully’ far away. Later on, Zungu’s drawings became larger. Zungu’s approach was a method unto itself. Not only was he extremely meticulous, working in a clean space with a felt tip, ball pen or ink and pen, Zungu also needed a ritual to be able to work. He would always have a bath before he started drawing. In sharp contrast with his own rural surroundings, human figures never feature in his drawings.