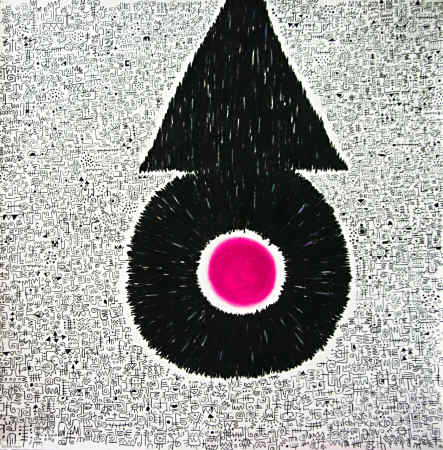 Viktor Ekpuk will be guest of the Foundation for a period during the exhibition "LIJNEN DIE SPREKEN" at Galerie 23 in Amsterdam.
In the exhibition Viktor shows a series of big drawing, technique that he started to explore further right during his residency at the Thami Mnyele Foundation in 2007.
During his first visit by the Thami Mnyele Foundation in fact Viktor was able to work on a bigger scale, this influenced him in his career to work at an other level.


Victor Ekpuk (1964), was born in Nigeria, and was educated in Obafemi Awolowo University, Ile-Ife. He has lived and worked in Nigeria, United States, and presently resides in the Netherlands. The central theme of his work is the exploration of relationships, challenges and responses to changes that characterize the human condition. Drawing is a very important aspect of his art. Of particular interest to his work is Nsibidi, an indigenous African system of writing that employs graphic signs, and codes to convey concepts.
The Exhibition will be visible from 16 September till 26 October 2012.
june 23 2015

In an April visit at Dartmouth, Nigerian-born artist Victor Ekpuk drew a mural on the wall of the Hood Museum of Art’s Lathrop Gallery in what he referred to as a drawing performance. He invited viewers to follow the rhythms of his drawing and to share in his experience in the moment, without necessarily understanding the marks on the wall. A show of his recent work, “Auto-Graphics,” is on view at the Hood through Aug. 2. While he was on campus, Ekpuk and Curator of African Art Ugochukwu-Smooth Nzewi had a conversation about the artist’s work.

Ugochukwu-Smooth Nzewi: We are very happy to have your exhibition Auto-Graphics on view at the Hood. We are even more excited that you are creating a wall drawing—the largest of your wall drawings to date—in Lathrop Gallery in conjunction with this exhibit. It is my understanding that it was the context of an earlier exhibition in Amsterdam that sparked what has become a critical aspect of your practice, the ephemeral wall drawings. Can you talk about this experience?

Victor Ekpuk: During a 2008 artist-in-residency program at Thami Mnyele Foundation in the Netherlands, I was invited to participate in an exhibition to mark the launching of ZAM magazine. The exhibition included works of celebrated South African artist Marlene Dumas as well as other artists and poets from Africa. I proposed to do a mural drawing based on the memory of my life in the Netherlands. Amsterdam Central was an encapsulation of my experience as a transient visitor there. I was intrigued by the idea that the drawing that I would spend several hours making on a gallery wall would eventually be erased to make space for another artwork. I saw this as a metaphor for life itself. The knowledge that I exist at one moment in time only to exit for something else to fill the space that I once occupied was a very humbling realization. On one level, Amsterdam Central was just an expression of the essence of the Netherlands from my perspective as a visitor. On another, I was probing an inner dialogue with existential reality.