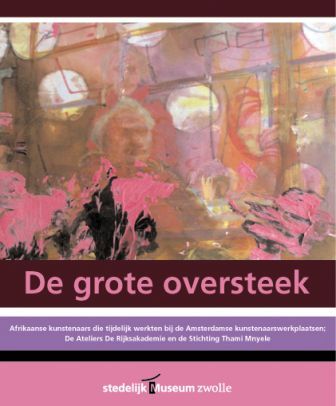 The exhibition is initiated by Zuidelijk Afrika Werkgroep Zwolle in cooperation with the Thami Mnyele Foundation.

It is a hazardous adventure to compose an exhibition of artists from a specific continent, but nevertheless we as a foundation Thami Mnyele reacted positive on the inviting request of the Zuidelijk Werkgroep Afrika Zwolle. The artists in residence of the Thami Mnyele foundation acts many times as the place, where artists from Africa can debate about art in all her forms ,contradictions, cultural exchange, and qualities. The exhibition and catalogue are presented in such a way , that it shows the diversity of the art from Africa .
We are the municipality Amsterdam, Zuidelijk Afrika Werkgroep Zwolle, De Ateliers, the Rijksakademie, and not in the least the Stedelijk Museum Zwolle very grateful for their collaboration to conduct ' the Big Crossing '.
Established in 1992, the Thami Mnyele Foundation runs a unique three month artists-in-residence program in Amsterdam, the Foundation engages African artists of all disciplines of contemporary visual art (painting, drawing, photography, sculpture, video, film, audio and multi media). Their work links up effortlessly with the Western art concept. At the very last due to the artists in residences and exchange programs in Africa itself , in the cultural places in Europe and the United States, but also, sometimes not realised, the cultural influences between Africa and Europe many centuries old . Art from Africa is therefor difficult to catch in one framework.The artists developed each personally a visual language. Though one aspect connects them; they all made ' the Big Crossing ', as mentioned once by Moshekwa Langa from South Africa. The exhibition shows work of artists from Benin, Mali, Zimbabwe, Zambia, South Africa, Egypt, Nigeria, and Angola. These artists worked since the nineties in Amsterdam, at De Ateliers, De Rijksakademie and the Thami Mnyele foundation. All works act together in the room of the Stedelijk Museum Zwolle as a ' wonderkamer, ' an old-fashioned tone chamber for objects from other cultures. A space in which a continuing interaction exists between artists with other contexts, where as much cultural-and identity displacement takes place as recognitions..