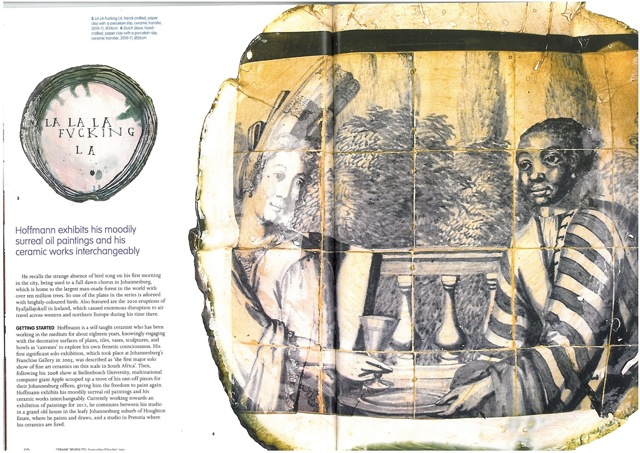 We would like to bring to your attention that the article "Frank, Rude, or Improper" about South African artist Ruan Hoffmann has been published in the September/October 2011 issue of the British magazine "Ceramic Review". In this article Alexandra Dodd looks into the politically confrontational work of artist Ruan Hoffmann.

"Johannesburg-based artist Ruan Hoffmann has been raising eyebrows in New York, Cape Town, and Amsterdam with his exquisitely irreverent ceramic plates.(...) None of his objects are intended to be functional – they are forms hi-jacked from the homey environs of the domestic sphere for the purposes of unfettered, spasmodic expressivity and quick stabs of stinging social commentary. The plate that flatly announces ‘You Racist’ springs to mind, or the simple black-on-white lettering that recalls a newspaper headline and declares, ‘Protection of Information Age’, or the chilling truism, ‘Millions of people can be wrong’. (...) The titles of his works occupy that gloriously overblown territory where romance meets tragedy, (...)."

Ruan Hoffmann was artist in residence at the Thami Mnyele Foundation in 2010.

For more information about the article: