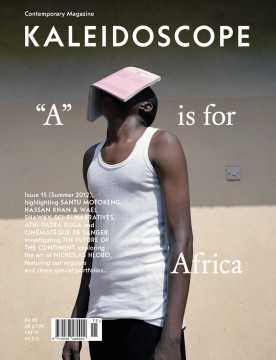 We would like to bring to your attention the magazine KALEIDOSCOPE that in the summer issue 'A is for Africa' will present Santu Mofokeng, actual guest at the Thami Mnyele Foundation, and Nicholas Hlobo artist in residence in 2004.

KALEIDOSCOPE
Summer issue out now 'A is for Africa"

Soon available in bookshops worldwide
and at www.kaleidoscope-press.com

KALEIDOSCOPE is pleased to present issue 15, Summer 2012, a special edition entirely devoted to art produced in (or related to) the African continent today.

In a time when the once-dominant western model is collapsing, the impressive growth of Africa’s economies looks likely to continue and its cultural offer is growing more and more vibrant, exposing the international audience to an incredible offering of art, music, architecture, film, and design.

This issue intends to be the most up-to-date and thorough exploration of the African scene of contemporary art and culture, from Egypt to South Africa via Ethiopia and Nigeria, conducted in collaboration with a dream team of both international contributors and influential thinkers and practitioners working in and around Africa today.

Main theme – The Future of The Continent, Continent of the Future:
Part A) Art by Nana Oforiatta-Ayim; Part B) Cinema by Olufemi Terry and Frances Bodomo; Part C) Music by Benjamin Lebrave; Part D) Urban Planning by Antoni Folkers.