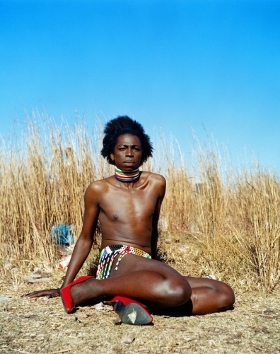 South African photographer Zanele Muholi has recently been announced a Laureate of the Prince Claus Fund 2013.

Zanele Muholi's photographs are a direct response to the epidemic of "curative rapes" and murders of black lesbians and queer people in South Africa today. As a self-described "visual activist", Muholi seeks to challenge the status quo with intimate portraits of the LGBT South African experience.

The Prince Claus Awards honours outstanding artists, thinkers and organisations whose cultural and artistic actions have had a positive impact on their countries' development. They are often role models and are an important source of inspiration for all those around them.

The exhibition fo(u)nd by Zanele Muholi is to be seen at the Prince Claus Fund Gallery in Amsterdam through 22 November 2013.

Zanele Muholi stayed in the Thami Mnyele studio during the period July-September 2009.