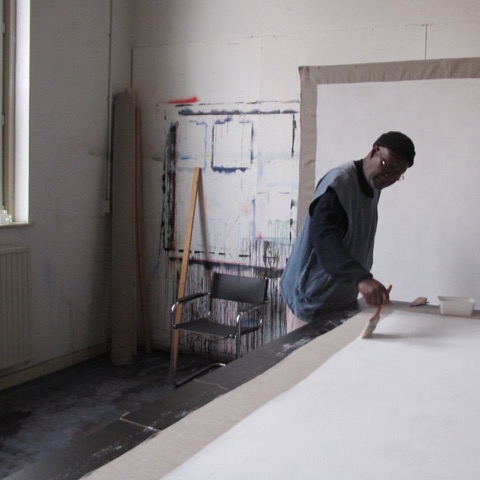 Howard Scott Gallery, New York is pleased to present the fourth solo exhibition of Ghanaian artist Atta Kwami. The exhibition is titled THAMI and will open on Thursday, February 16, 2017.

Atta Kwami : "In the Summer of 2016 I began body of work in the THAMI MNYELE Award Foundation studio in Amsterdam. Thami Mnyele (1948-1985) was a South African artist and activist who died in exile in Botswana. The atmosphere of the studio, its generous proportions, its location, and the organizational support of the team were enough to launch me in a new direction. These paintings, the Thami Mnyele paintings, embody the rhythms and spatial dialogues that excite me when I experience the drama of city architecture. More recently in Ghana, I have been looking anew at vernacular roof-tops, at their complexity and simplicity which say so much about the aesthetics of the region; its geometry and its abstractions."