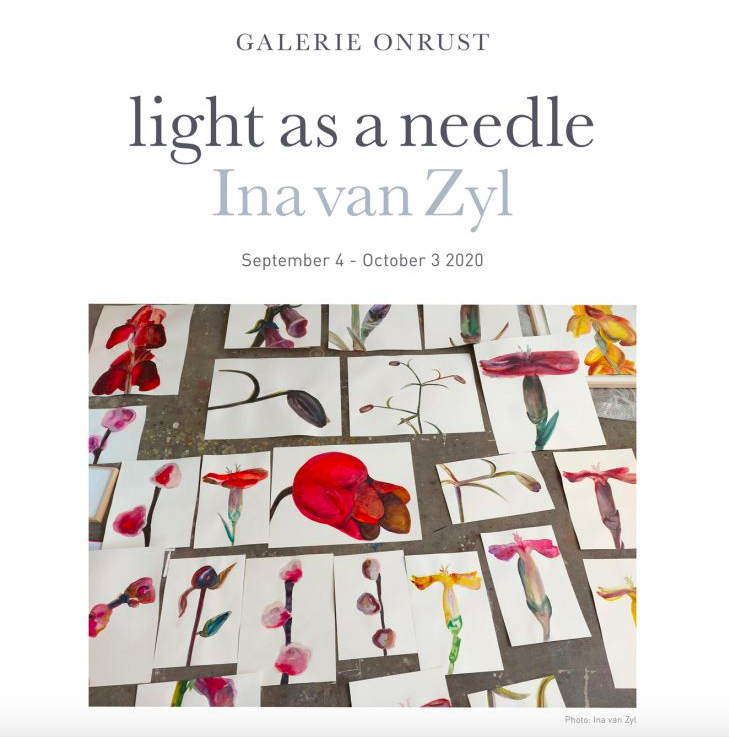 In the work of Ina van Zyl, flowers are o en not simply flowers. They have been given tles such as 'Schoot' (Lap), 'Envy' or 'Li le Orgasm'; aside from being beau ful and seduc ve, they are also slightly awkward. As though concealing something that is being revealed only by degrees: desire, shame, pride and sensuality. That feeling is certainly true of her new series Lente (Spring), watercolors of various types of flowers that she produced during the lockdown. More than anything the series shows that the power of that par cular spring could not be suppressed. The watercolors glow as celebra ons of life and now, as an ensemble, hang happily and provoca vely on the wall under the poetic yet ambiguous tle light as a needle.

Van Zyl calls the flowers by their names: lily, peony, carna on. But their ambiguity is merely heightened by the technique of watercolor. Take the iris, for instance. She paints this in voluptuous blossom, in countless shades of red and yellow, its 'crêpe-paper' petals taking on sculptural forms as transparency and weight coincide. The petals hang outward like voracious tongues but, once withered, they shrivel up and droop with an intensity of color. "If I only see flowers as being beau ful, there's li le I can do with them," Van Zyl has said before about her fascina on with flowers. "But when there's fric on, things get interes ng. Take the flower buds: they're lovely, but at the same me I have the urge to pinch them to pieces."

Vulnerable and powerful, untouchable and yet so , such contrasts are brought together by Van Zyl to define the image. Lilies s ll in bud form, the stems making elegant but unexpectedly dis nct angles. And carna ons petals popping through the bud like a small erup on while the bud remains intact: a sensual image sugges ng the fusion of the masculine and feminine.The same holds true for the warm and radiant colors. Van Zyl s rs them up and knows precisely when to rein them in. They flow together, blend and some mes disperse like oil and vinegar along frayed contours. They are dark and light, harsh and gentle, glistening and dull. They decelerate the eye and force it to concentrate. At such moments paint and flower seem to become one.