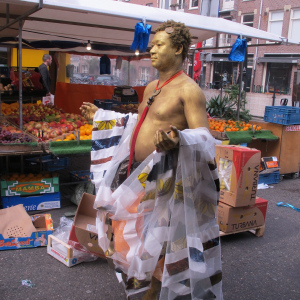 Bernard Akoi-Jackson on his way walking solemnly up and down Ten Katemarkt, Amsterdam, 5 November 2014

Bernard Akoi-Jackson (1979) is an artist-in-residence at the Thami Mnyele studio in Amsterdam. This morning, he performed ‘BLOCK’ as a goodbye to the neighborhood where he spent the past few months as a resident. The Ten Kate market was a suitable scene for his appearance as a personalization of trade and wealth. His golden skin, his dress and the fabric he was carrying from one side to the other of the whole length of the market, provoked quite some reactions amongst the market sellers and clientele.

He will be flying back to Ghana in two days but we will hear back from him as a PhD student at Kwame Nkrumah University, as a member of the Exit Frame Collective and a friend of the Nubuke Foundation in Accra. Thank you, Bernard!

To view the full article here